Hey everyone! Yeah, yeah, yeah, I know it been a LONG time since we've last posted here. Life happens and other things take priority. However, I am happy to say we've been tweaking the website with a new look and have been updating it with some NEW and AWESOME inventory! We are now selling baby, toddler and little kids clothing from Carter's, Nike, Calvin Klein, and PUMA so make sure to save our site or even LIKE us on FACEBOOK to find out when we've updated it with all of the new stuff.

We've also added some new Carter's and Blankets and Beyond baby security blankets. 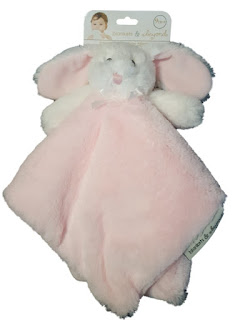 Posted by Kids Place For Toys at 10:59 PM No comments:

We have been adding a lot of new and fun things to the website for a couple of weeks now. Take a minute to check in and see what we have! We've been listing baby clothing that would be perfect for a baby shower gift, some new nursery items and especially our favorite, kids toys!

http://kidsplacefortoys.com/category/new.htm
Posted by Kids Place For Toys at 10:41 PM No comments: 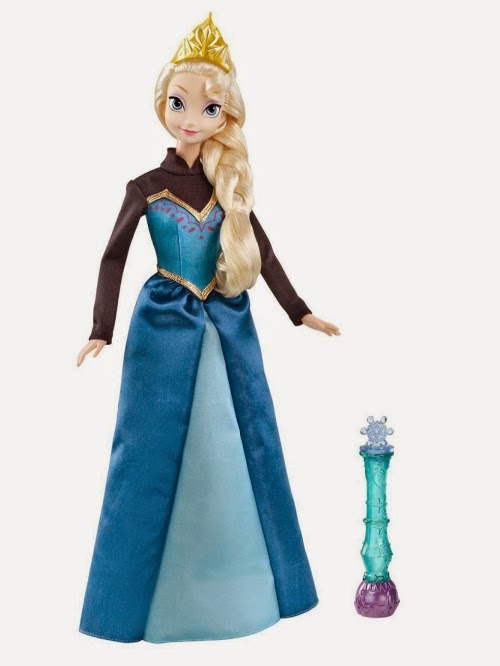 Every one is looking for any and all Disney Frozen dolls and toys right now. We have just listed a very limited stock of some of these hot and popular toys on our site right now. Follow the link to see what we have in stock right now!

http://www.kidsplacefortoys.com/item_3767/Disney-Frozen-Elsa-Color-Change-Fashion-Doll.htm
Posted by Kids Place For Toys at 11:53 PM

Help Kids Place for Toys receive a grant from Chase! All we need for them to review our application is 250 votes from YOU! If you could take just a moment of your time we would appreciate your vote so that we can expand our product line even BIGGER for you!

Thank you!
Posted by Kids Place For Toys at 11:19 PM No comments: 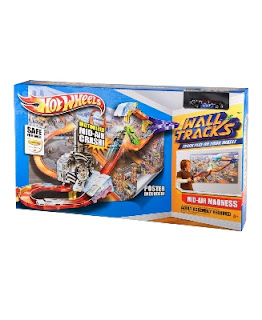 Hot Wheels Wall Tracks Mid Air Madness BoosterTrack
Hot Wheels Wall Tracks Mid-Air Madness Booster Trackset: With a boost, crashing and fast-paced action come to Wall Tracks sets. The booster launches cars up the ramp for anti-gravity thrills. The track works with multiple cars for mid-air madness. And the poster adds a background for the adventure and action. The set and poster can be hung with the included safe-for-walls Command strips from 3M. This set gives new meaning to climbing the walls. Includes 1 car. Not for use with some Hot Wheels vehicles. Collect more sets for even more Wall Tracks fun.

Posted by Kids Place For Toys at 12:35 AM No comments: 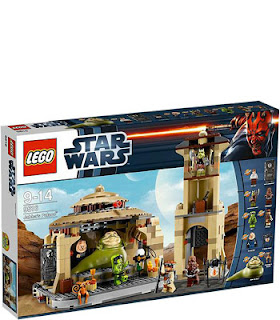 Rescue Han Solo from Jabba the Hutt's desert palace! At Jabba's Palace on Tatooine, Princess Leia is disguised as Boushh as she tries to rescue Chewbacca and carbonite-frozen Han Solo. Can she get past the roof-mounted missiles, defense guns and surveillance equipment to reach them? Or will Jabba and his motley band of followers capture the princess and entrap her beneath Jabba's sliding throne? Includes 9 minifigures: Jabba, Salacious Crumb, Bib Fortuna, Gamorrean Guard, Oola, Han Solo, Princess Leia in Boushh outfit, Chewbacca and B'omarr Monk.
For ages 9-14 years
LEGO Star Wars Jabbas Palace 9516

Posted by Kids Place For Toys at 12:30 AM No comments: 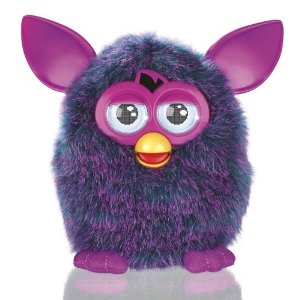 Time to dust off your Furbish dictionary because Furby is back and ready to take the world by storm. Feed it, speak to it, tickle it, play music for it and shake, tilt or turn your Furby upside down. But be warned - how you treat your Furby will shape its personality. Are you ready to handle a Furby? Who will your Furby become? It all depends on how you play you’re your Furby.

When you first meet your Furby, it will speak mostly Furbish. But the more you play with Furby, the more English it will speak. It responds to your touch, your music, and even to other Furbys (each sold separately). But remember: your Furby has a mind of its own. You can also download a free app to help you translate Furbish, as well as virtually feed your Furby and other interactive features. App is optional and works with iPad, iPod touch and iPhone with iOS 4.2 or later.

Posted by Kids Place For Toys at 9:51 AM No comments: 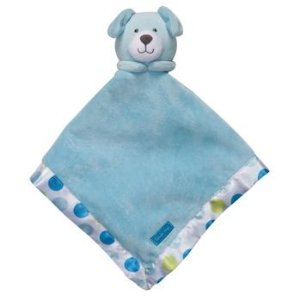 New and Discontinued Security Blankets from Carters, Tiddliwinks, Blankets and Beyond

We are currently in the process of adding a new assortment of New and Discontinued security blankets and loveys from your favorite brands. We have recently added Carter's, Blankets and Beyond, Baby Starters, Gund, Kids Preferred, and Tiddliwinks. Be sure to stop and take a moment to see what we have. Most are sure to make a perfect baby shower gift or to even have a back up blanket in case the original one gets lost.


http://www.kidsplacefortoys.com/category_85/Security-Blankets.htm
Posted by Kids Place For Toys at 11:12 AM No comments: 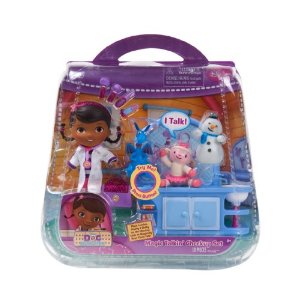 Everything Doc McStuffins needs to run her clinic, and three little creatures for her to treat. Place Lambie, Stuffy and Chilly on the checkup table to magically hear them talk.
For ages 3+ years

Posted by Kids Place For Toys at 12:06 AM No comments: 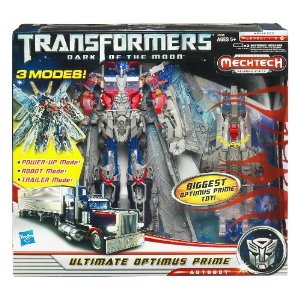 Convert From Truck to Robot
Recommended for ages five and up, Ultimate Optimus Prime is one of the most fully featured action figures you'll find. Initially, Ultimate Optimus Prime appears as a semi-trailer truck in Trailer Mode. With its vivid red and blue finish and distinct racing stripes, Ultimate Optimus Prime's truck form is as detailed and well built as any model truck and would be a perfect addition to a cabinet or dresser top. The truck is able to roll freely on carpet and hard surfaces alike.
Like all Transformers, there is more to Ultimate Optimus Prime's truck form than meets the eye. When it is time for him to come out of disguise and lead his fellow Autobots into battle, he can transform into a massive, powerful robot in Robot Mode. Using Power Mode, the trailer converts into the Omega Combat Armor, allowing Optimus to be placed inside for an impressive 22-inch high stature with extended wings. Equipped with a firing Ultimate Super Cannon and retractable battle mask, Ultimate Optimus Prime is handsomely detailed and articulated, so he's posable.
Advanced Lights and Sounds
Ultimate Optimus Prime can light up and make a variety of sounds. The Ultimax Super Canon features separate buttons to create rocket and plasma firing sounds with coinciding flashing red lights. With a pull of the sliding trigger, the front of the canon opens up for a coordinated burst of lights and sounds, accompanied by the iconic phrase "I am Optimus Prime!"
Challenging Transformation Process
Serious collectors may have some concerns about the figure, particularly his posability. His wrists and waist don't move, limiting his articulation, and some of his joints range from being too stiff to too loose. The Ultimax Super Canon, while impressive in its massive weight and size, makes it difficult to balance Optimus once it's connected to his body and limits his motion. Also, his wings detach frequently, yet are easy to snap back on.
The figure's robot-to-truck conversion is especially difficult to perform, taking up to 30 minutes. Younger children might not be able to transform Optimus Prime on their own. Still, these flaws can be overlooked, given the overall high quality of the toy. For added connectivity, the figure features six Mechtech ports on the highest wings and four on the canon, making it easy to attach separate weapons for enhanced play (sold separately).
About Transformers
The Transformers began as a Hasbro toy line back in 1984, featuring toy vehicles that could transform into robots. The toys soon inspired an entire universe of fictional story lines, pitting the two factions of Transformers--the heroic Autobots and the evil Decepticons--against one another. A live-action movie based on the Transformers was released in 2007 and has continued the toy line's popularity. With toys such as the Ultimate Optimus Prime Figure, kids can bring home the struggle between the Autobots and Decepticons.
What's in the Box
Ultimate Optimus Prime Figure, trailer, MechTech Weapons System Ultimax Super Cannon, two AA batteries, and instructions.
For ages 5+ Years

Posted by Kids Place For Toys at 12:02 AM No comments:

Where to find those Hard To Find toys!

Sign up to receive our Newsletters with Deals and Steals!

Kids Place For Toys
Florida, United States
We are a long time online toy seller on ebay and our website. We want to be your FIRST STOP when looking for that special toy. Can't find something? Contact us! We have many sources to go to so we can find that item for you!